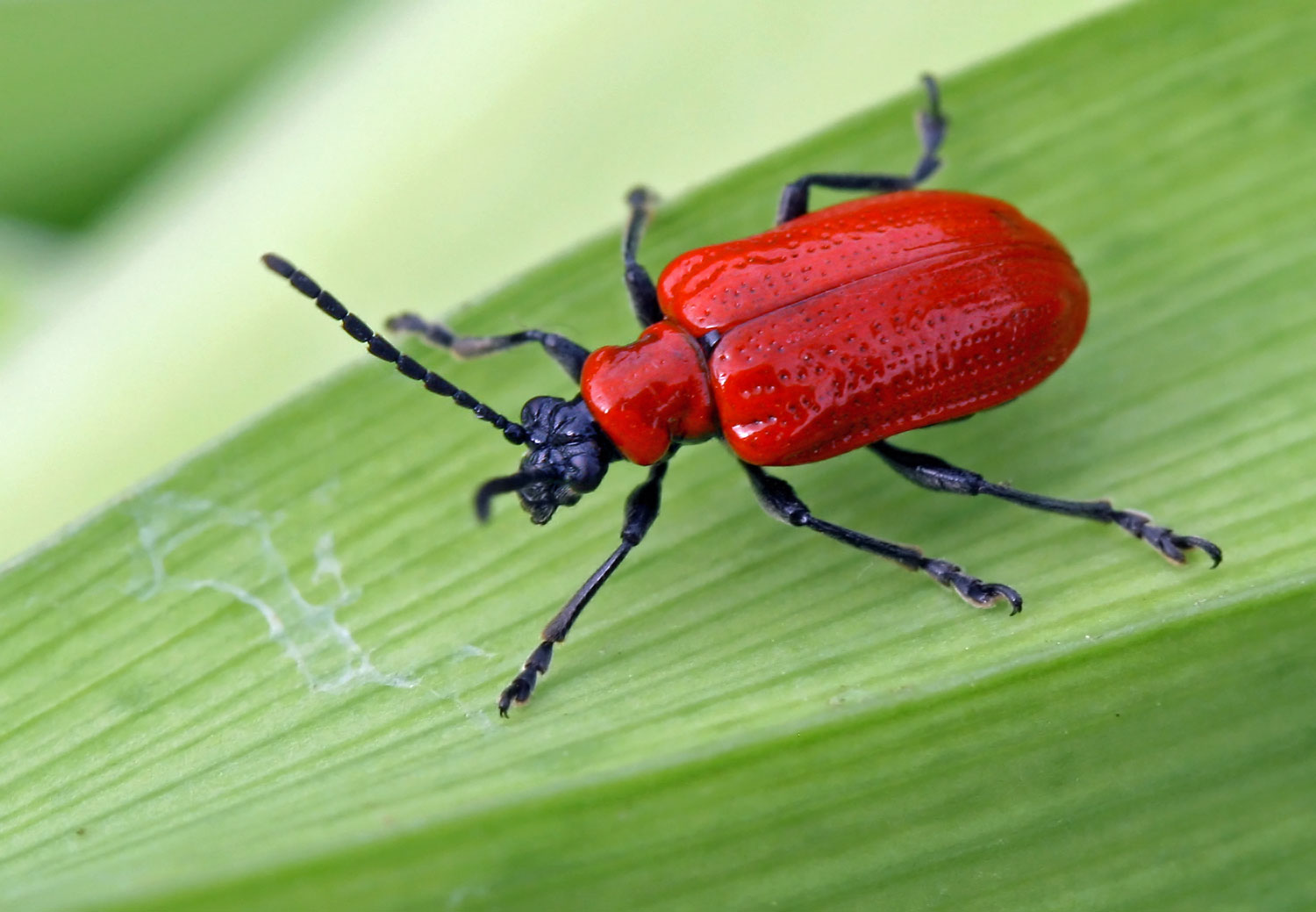 The red lily leaf beetle (Lilioceris lilii) is an insect native to Europe and Asia which rapidly spread through New England and Canada from Eastern Massachusetts.

If uncontrolled, the beetle will complexly defoliate and ultimately kill all true lilies (Lilium species, such as Asiatic, Oriental, Easter, Tiger and Turk’s Cap lilies). It will also feed on fritillaria species.

The adult beetle is bright scarlet red, with black legs, head, antennae and undersurface. It is 1/4" to 3/8” long and is a strong flyer. The adult lays reddish-orange eggs which hatch into particularly unpleasant larvae, which look like 3/8” long slugs; coloured orange, brown, yellow or green with black heads. The larvae cover themselves with their own excrement (known as a fecal shield) to repel predators. The larvae eventually become fluorescent orange pupae.

The adult beetle overwinters in the soil or plant debris and emerges in early spring looking for food and a mate. After mating, the female lays eggs in lines on the underside or Lilium or Fritillaria leaves. Some damage is done by the adults at this time, but the major damage comes when the eggs hatch into larvae in 7-10 days. The larvae voraciously consume all leaves within reach and may then start on flower buds. This continues for 2 to 3 weeks, when the larvae then drop into soil and begin to pupate. In another 2 to 3 weeks the adult beetles emerge to start eating again. This process occurs from early spring to mid-summer. Reportedly the beetles wont mate and lay eggs until the next spring.

First of all, if you’re in an infested area, avoid sending any lilies or other plants to anyone else, and carefully inspect any plants you receive.

Hand-pick the beetles: Drown them in soapy water (the water has to be soapy so the beetles don’t just swim and crawl out). If you get all the red lily beetles in the early spring when they first emerge from the ground, you’ll not see too many more problems the rest of the summer. If you miss picking them, your lilies will be eaten to the ground.

Use Diatomaceous Earth. (Slug Dust or Earwig Killer). This powder is reputed to work on the red lily beetle by giving it lots of tiny cuts and the insect dies from dehydration.

*Pyrethroid insecticides (Permethrin is one): Will kill adult beetles